When it comes to university executive pay, civil society expects increased levels of transparency and accountability from both the public and private sector, regardless of where the revenue is sourced from.

Government expects reasonableness and fairness. However, what is perceived as “reasonable” depends on several factors including political ideology. There is also the relative role that a public funded university plays with other institutions such as health trusts and local councils in communities and the effect this has on perceptions of executive pay.

Equally, universities are considered centres of truth that society relies upon. This can create an expectation of higher levels of integrity, fairness and transparency when it comes to the way they behave and reward, including executive remuneration.

Unfortunately, evidence seems to suggest that higher education is dragging its feet.

As Wonkhe has covered elsewhere, executive pay in UK higher education has been a point of tension for at least the past 25 years. In fact, this has been an issue across many sectors and it would appear for good reason. The chart below highlights the pay disparity between a CEO and the average staff member across a range of sectors. 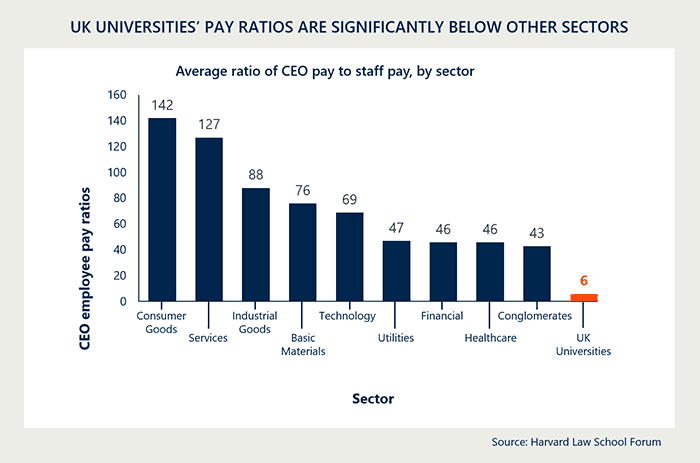 Higher education is not immune from this debate. There are repeated articles in the media and statements by politicians about higher education executive pay.

A signal of value

UK higher education commentators, media and politicians all frame remuneration from a point of view of cost (i.e. they are paid too much). The chart below provides a comparator of vice chancellor pay across multiple countries and institutional forms. 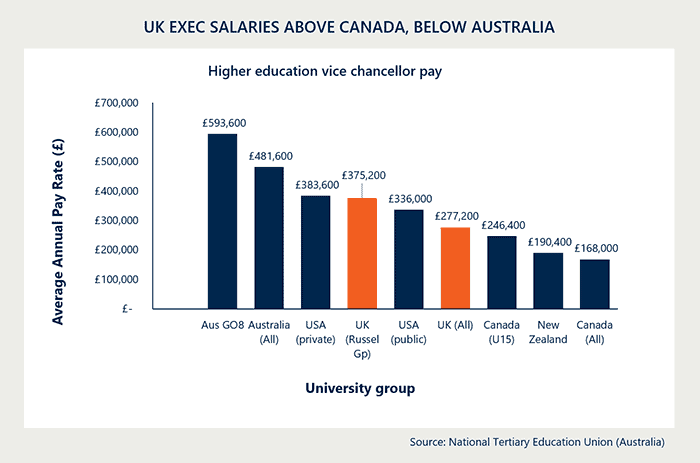 While it may be difficult to draw too many conclusions from this data, the surprising element that comes out is that the UK maybe doesn’t “overpay” its most senior executives relative to others. It is comparable to pay levels for similar roles in Canada and the USA. The anomalies here are the Australian universities, particularly Group of 8 institutions.

Further analysis between the UK and Australia paints an even more intriguing picture of executive salaries. The chart below analyses the ratio between the size of the student body verse the vice chancellor’s pay. 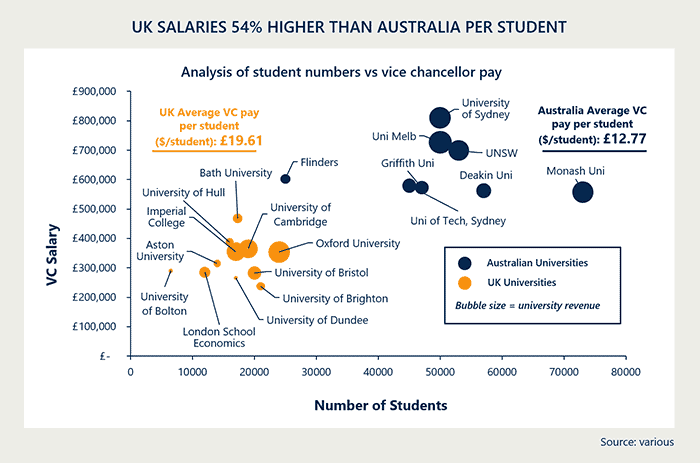 What emerges here is that in both jurisdictions, there is higher pay in general for institutions that have larger student bodies. Research from the University of Kent also appears to show that the smaller institutions follow the larger ones on executive pay.

Setting the right executive pay (and managing the performance expectations that befit the pay) is a contested domain. The OfS recently stated that higher education executives should be paid less year on year seems narrow in view as does the converse argument of “you get what you pay for.”

If there is a real story, then it should be one where greater maturity is required by both the sector and the OfS. Institutions must do a better job at articulating the rationale for executive pay including pay rises and payouts, and genuinely engaging the community is this discussion in a language that the community appreciates.

In the end, there has been too much commentary on the topic and too simplistic a response by the regulator and the sector. It’s time to properly work through the issues together and to co-create an approach that moves beyond single points of view to one that garners respect from all parties.

Select an independent head (probably with an ethics background) to review and recommend an approach to executive pay in higher education, Spend time listening and really understanding the different lenses. Hold proper co-design sessions with diverse stakeholders that are expertly facilitated. Use data and see what other regulated industries are doing around the world. Put out discussion papers. Be bold with the possible.

Frankly, we can all do better than where we are today and have been for the past 25 years.

This piece was originally published on Wonkhe.

Get in touch to discuss how Nous Group has help with your executive remuneration strategy.

Seize the day: is now the time for UK universities to explore collaborations and mergers?

The world is changing faster than institutions can organically. Mergers,…
Read Full Insight

Higher education in the UK and Australia: A cross-continental discussion

How UK universities can respond strategically to the climate emergency

To make their climate strategies a success, universities need to…
Read Full Insight
We use cookies to improve your experience of using this website. By continuing to use this website you have consented to using cookies placed on your computer. To find out more please refer to our Privacy Policy.Close