But their connection to those on the ground is unintelligible. Their strings are invisible – giving them an unreal quality that is magic, until the wind stops.

On other days – better days in my view – universities are more like trees in a rainforest. They have connections to the sky, which provides the carbon for growth; but also to the forest floor –the businesses and communities surrounding them – that sustains their great trunks with nutrients. Unlike the kite, this university vision is more organic, messier and more self-sustaining, albeit still susceptible to weather change.

I recently joined the London Higher 2017 Plenary discussion: Collaborations 2.0 – Connecting Cities, Universities and Networks for Changing Times Around the World. This is a topic I am very interested in, given my work with Nous Group, the Committee for Melbourne and as Chair of Rhodes Scholarships in Australia. The role that universities can play in helping to build great cities, enrich societies and increase prosperity is a critical conversation to be having.

In essence, all universities face the pressing dilemma of how to reconcile on one hand, the public good that activates and inspires them, and on the other, the financial performance required to sustain and enable them to reinvest in their future. This is a valuable lens through which to consider the role of university connections and partnerships.

It is also important to consider some additional dilemmas faced by universities:

In light of these dilemmas – where the direct effect of universities may be perceived to be limited to an already fortunate subset of society – the connections that universities create must consider both their own private institutional interests, but also the broader public interests of the communities in which they operate. By this, I am in effect questioning whether universities’ traditional assumption of an automatic licence to operate is at risk.

The model following is a representation of the increasing challenges universities face in managing their connections at different levels. All circles of connection are important in their own way, but each is more challenging than the one before. 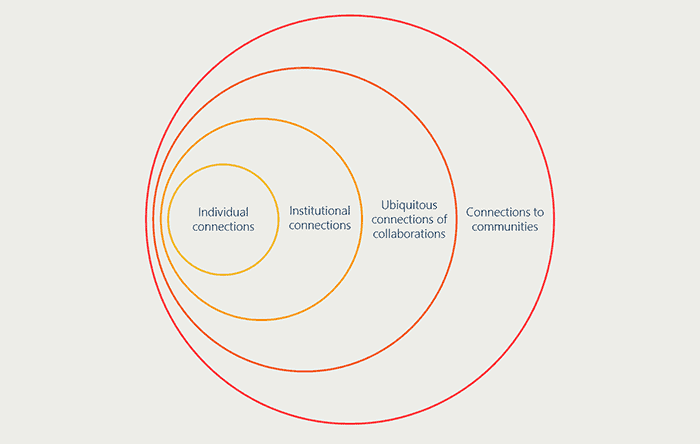 The yellow inner circle represents the individual connections that successful academics make with colleagues around the world, developed over time, sustained by conferences, and manifested by joint papers. These connections are critical for the transfer and growth of knowledge, for the sharing of learning. These connections can also reinforce the self-referential nature of universities (referenced in the kite analogy), where their connections are essentially with each other.

In the second light orange circle, are the institutional connections and partnerships that universities create with each other, either bilaterally or multilaterally. Again, if done judiciously, these connections can be increasingly valuable. They provide a channel for institutions that have previously been largely defined by their physical location, to establish a global presence. These connections are essential to a university’s strategic positioning and reinforce higher education as a global sector.

It is worth a pause here to suggest that if universities become too focussed on the first three circles of connection, they risk becoming disconnected from the “rainforest soil” in which they were initially rooted.

Therefore, the red fourth circle – the circle of connections to communities, industry, government, and society as a whole – is most critical in strengthening universities’ licence to operate. Connections to the community in all of its manifestations are what will help universities to embed their roots deep in the soil, and enrich it, as in a true rainforest. This circle may be seen to create the least immediate performance or financial benefit for universities, and can at times be difficult and costly to engage with. But these connections should be considered akin to investment in research, because they reinforce the value of the university. This fourth circle is not a choice of whether, but rather how and how much.

The fourth circle – transforming and connecting

Being transformative requires a university mindset that is present in its physical location. This means developing a more explicit local consciousness that ensures the benefits of a global network are shared with local communities and do not come at the expense of domestic relevance.

Connectedness means that universities build and develop their strength through exposure to new thinking, inputs and reference points. While most higher education institutions innately do this – the opportunity (and challenge) now is to broaden and deepen the range of connections within their home environments.

Addressing the fourth circle does not mean universities should retreat from the world-stage or from competition. Rather, it entails achieving value jointly, across multiple dimensions – at home and internationally. The concept of transforming and connecting envisages universities that are more wholly and visibly engaged in their spatial location than ever before. Where this is achieved universities can connect their communities with the world and help to transform the trajectory of national interests. Through this, universities can become the trees of the rainforest, and help to drive the economic, social, physical and cultural development of their locale – thus becoming an essential ingredient to its success.

Future directions of successful economies – My discussion with Charles Leadbeater

Where resources are limited and competitors are highly motivated, the…
Read Full Insight

Student experience: the potential in restorative justice for universities

The potential impact of Brexit on higher education (HE) in…
Read Full Insight
We use cookies to improve your experience of using this website. By continuing to use this website you have consented to using cookies placed on your computer. To find out more please refer to our Privacy Policy.Close