COVID-19 has acted as a catalyst for more modern service delivery and new ways of working across the public sector. For many organisations the pandemic has unleashed productive capacity, improved collaboration and sparked innovation.

But how can we make these improvements permanent once the pandemic passes?

In September, Nous Group brought together 20 senior executives from the NSW public sector for a virtual roundtable to explore the changes in the ways of working, service delivery and culture in recent months.

Our panellists were Marcus Ray, Group Deputy Secretary, Planning and Assessment in the Department of Planning, Industry and Environment (DPIE), and Brendan Thomas, CEO of Legal Aid NSW.

We are pleased to share some insights from the roundtable. 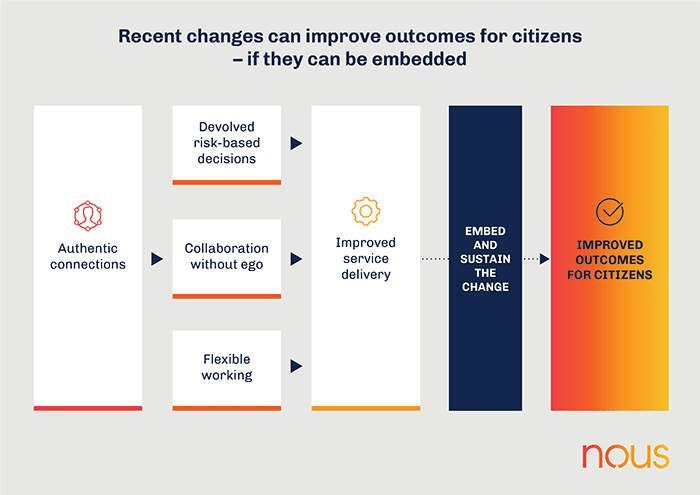 The pandemic has given leaders licence to improve service delivery

The coronavirus pandemic has fundamentally altered the conversation around change in many organisations. Leaders who had ambitious plans but were struggling to win support have found that the new circumstances have given them greater licence to initiate and implement change. This has required making the collective purpose of the organisation clear and giving people a meaningful role in response.

Mr Thomas said COVID-19 prompted Legal Aid to accelerate its plans to redesign its service delivery model and to make the recent changes permanent. He said the pandemic was a catalyst for change, noting that some staff who had previously been reluctant were willing to pivot quickly. “You should never waste a crisis to drive transformation," one public sector leader said.

COVID-19 created an urgent need for public sector organisations to access stakeholders to understand the pandemic’s impact, to share information and to deliver services. Often this required new channels for engagement.

Mr Ray explained that his department moved to fully online public engagement and consultation – and now plans to make it permanent. He noted that online engagement offered unexpected benefits, including more equitable access for stakeholders in rural and remote areas, a greater number of people engaging and higher quality engagement. Online engagement has also removed some challenges that can arise with public forums, such as people grandstanding, and has fostered concise communications.

Many agencies noted increased use in digital technology to improve service delivery, including some agencies that are traditionally light users of digital tools. For example, the prison system has introduced a system of online visits for inmates, while the court system has used online planning hearings, which have reached more people than ever before. “We want to retain the more rapid and direct access with citizens to understand their insights about future service needs,” one roundtable participant said.

Staff are being empowered to make risk-based decisions

With fast decisions needed and information diffuse, many organisations have devolved decision-making to people where the issues are, such as frontline workers interacting with citizens and stakeholders. Done right, this can allow better, faster and more responsive decisions, while also helping leaders manage fatigue during a crisis.

Embedding risk-based decision-making on operational and procedural matters can mean less paperwork and fewer meetings. This can give leaders an opportunity and headspace to focus on strategic and policy considerations. Similarly, senior leaders can show trust in their employees by empowering them to make risk-based decisions while they provide clear direction.

Mr Ray explained that his department needed to accelerate decision-making in planning, in order to spur economic activity and job creation, while maintaining high standards of community consultation and ensuring integrity. To do that, staff were empowered to make risk-based decisions.

Leaders are collaborating without ego

The challenges that have arisen during the pandemic have required greater collaboration within and between government agencies.

Many public sector leaders noted that collaboration is becoming more equal and inclusive. With physical barriers being removed, the silos are less visible, and focus is shifting to organisational purpose and priorities.

The online environment has reduced hierarchy through inclusive and structured participation in virtual meetings, where everyone, not only the loudest voice, can contribute. “People in operational roles come to the call on an equal footing rather than being summoned to the office to talk to the suits,” as one senior public leader put it.

This has helped support functions to understand how they contribute to the core work of the organisation. With such a large proportion of staff working remotely, it has become more natural for people from multiple offices, especially outside head office, to be invited to participate in conversations.

Mr Thomas noted that collaboration among agencies has also improved. Legal Aid sought support from the courts in resolving the matters electronically; the courts have responded quickly and helped to facilitate digital engagement.

The shift to home working has been heavily documented. Many public sector leaders said that even after the pandemic their workforce is likely to return to the office in reduced numbers.

Mr Ray said that in his department an initial survey indicated that 80 per cent of people wanted to work from home but a second survey found people do miss interaction from the workplace.

Mr Thomas said Legal Aid has experienced increased productivity and its regular staff survey had detected improved well-being while working from home. His organisation has provided guidelines on how often people need to be in the office, how often managers need to check-in with their people and have team meetings. The aim is to maintain the well-being, productivity and culture of the organisation.

Several participants in the roundtable noted that activities that add little value – a traditional drag on productivity – had decreased during the pandemic. People are witnessing a drop in disputes and grievances, which indicates improved productivity. “Feedback from managers and staff show they are just sorting stuff out rather than letting issues escalate as they might do at other times,” one participant said.

Despite remote work being mostly positive, public sector leaders reported that middle managers found it challenging to manage workforce remotely. One public leader said combining several people in the room and some online remains difficult in managing meetings. Not having constant visibility of your workforce requires middle managers to extend trust and rethink performance management.

Accepting flexible work arrangements as standard means that newcomers to an organisation need to accept flexibility. This requires the organisation to rethink what it tells new employees, how it brings them on board and how it introduces them to the organisational culture.

Remote work has invited colleagues into each other’s homes. Public sector leaders said seeing people at home and talking about kids, animals, partners, furniture, pictures and plants has been overwhelmingly joyful. It has helped them to connect with their people and break down barriers.

Leaders have ditched the suit and become more approachable, open and vulnerable, showing their human side. Leaders and staff are connecting with and learning about each other as they share details about themselves and their personal lives. “There is an acceptance that all leaders – not just good leaders – should care and check-in on well-being as part of their core role,” one participant said.

Since working from home blurred the line between work and life, employee well-being and mental health is also increasingly important for leaders. One public sector leader said they were worried about social isolation, so they ensured every person had contact at least one a day. This has increased the engagement and well-being among staff.

How can you effectively embed and sustain the change?

Given these changed circumstances, every leader is grappling with the question of how they can embed and sustain the positive changes they have seen. We think there are five actions that organisations can take:

While the pandemic has been highly disruptive, it has also brought opportunities. Organisations that fail to capture these opportunities risk slipping back into earlier poor habits. They need to act now to make the change stick.

Get in touch to discuss how Nous can help your organisation embed positive change.

Co-authored by Simon Smith during his time as a Nous Principal. Article written with support from Simon Guttmann and Ingrid Molan.

Connect with Kelly Samson on LinkedIn.

To support leaders through these testing times of COVID-19, we…
Read Full Insight

Amid social distancing due to COVID-19, how can people stay…
Read Full Insight

As parts of the UK head into COVID-19 lockdown, Nous…
Read Full Insight
We use cookies to improve your experience of using this website. By continuing to use this website you have consented to using cookies placed on your computer. To find out more please refer to our Privacy Policy.Close